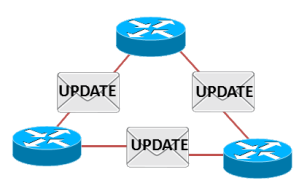 Enhanced Interior Gateway Routing Protocol (EIGRP) is an impressive set of features for IP Routing, which converges quickly and is on par and sometimes faster than OSPF. This routing protocol requires less processing time, less memory, and less network design than compared to OSPF. (Edit: Cisco has open this up to the IETF but you could still see issues if you found a vendor that supported EIGRP and not all features are supported***) EIGRP does not really fit into a specific spot of either Link-State or Distance vector, instead it stands on its own and is called hybrid routing protocol.

EIGRP has tree tables it keeps a track of, EIGRP Neighbor, the topology table, and routing table:

If routers are connected to each other and exchange topology information then the following must be true:

Some other information about EIGRP is that the hello and update messages that EIGRP sends use a multicast IP address of 224.0.0.10. EIGRP uses metrics called Bandwidth, delay, reliability, and load. By default EIGRP uses bandwidth and delay but these values can be changed and added into EIGRP’s metric calculation.

That’s my quick rundown on EIRGP, Check back often as I will have some configuration examples up and go in a little deeper into the EIGRP like talking about successors and feasible successors. I hope this information is helpful and if you have questions please post them.

Summary of EIGRP and OSPF

*Some this information was provided by visiting the following link:http://www.cisco.com/en/US/tech/tk365/technologies_white_paper09186a0080094cb7.shtml

View all posts by Ryan

One thought on “EIGRP… The Basics”